It’s that time again y’all, Cinco de Mayo is here! It’s such a fun holiday for me because I participate in something called #MargaritaWeek with a bunch of other amazing bloggers and creatives. Also, we all know that margaritas are my favorite drink of choice and if you missed my ’healthy’ Cherry-Berry Lime Kombucha version, check it out.

I also just love everything about Cinco de Mayo – chips and salsa are my love language, and a ton of queso. I mean, does it get any better? NO! It’s usually an upbeat, fun day spent with friends or family, games and laughs.

I’ve had the pleasure of experiencing quite a few bars in NYC in my short 6 months here and there was a cocktail at one place with a grapefruit and cinnamon combo. Sounds interesting right? Cinnamon makes things naturally sweeter. Have you ever put cinnamon on strawberries? Go do that right now! Anyway – back to the cocktail. Grapefruit is naturally kind of tart and bitter so the cinnamon with it adds depth and sweetness.

Tequila is one of my favorite liquors but I know it can be controversial for a lot of people. I feel like you either love it or you hate it because of a bas experience in college, am I right? Did you know that tequila is actually one of the ‘healthier’ liquors? The clear ones and of course a quality brand. I really love Casamigos and that’s what I used in this recipe!

Here is a link to the Margarita Week Page where you can find a TON of margarita recipes but also some margarita inspired food recipes.

Find the Grapefruit Cinnamon Marg recipe below and let me know if you make it! Tag me on IG or comment below! 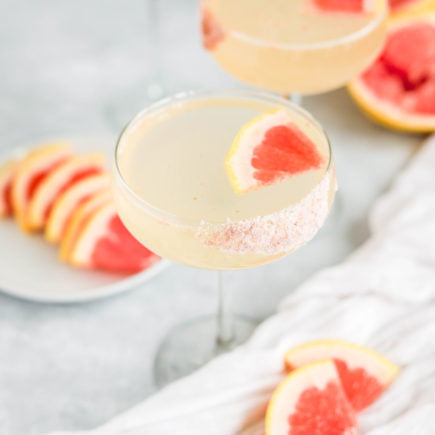 How did I get so lucky?! I have the best mom there

I’m obsessed with this picture. I took it while