Looking for something?
Spread the Love!
Jump to Recipe

One of the hardest things to figure out as a person ‘on the go’ is what the heck I can eat for breakfast that is delicious, will fill me and is healthy, right? We all want something we can have fast with minimal prep work. These Cornbread Apple Sausage Muffins hit the friggin’ spot!

I’ve always been someone obsessed with cornbread and different cornbread recipes – hellooooo Boston Market. OMG I used to LOVE their corn bread. I also secretly love corn dogs and still crave them…like a lot. I only ever eat them at like sporting events or…Disney? These muffins taste just like breakfast corn dogs you guys!!!!! I made sure they were gluten and dairy free because that’s the way I like to live like 80% of the time. I like using Bob’s Red Mill Gluten Free Corn bread Mix, it’s super easy to just throw in a bowl and mix up. If you’re a Sunday (or even Monday) meal prepper, you’re going to love these. I make them and even freeze them sometimes so kevin can grab them and run out the door. I’ll occasionally eat one of these or a pb banana oat bar pre-workout.

Are you a fan of the meal prep situation? I’m not…really. I honestly just don’t love leftovers. Everything is so much better when you cook it fresh but I totally understand why people do it. It is convenient to have things ready to go and be re-heated at the drop of a hat. I will prep roasted veggies sometimes but that’s kind of as far as I go. I don’t like pre-cooking meats. Other than that, I have no problem preparing breakfast things like these blueberry cashew almond oat bars, or the cornbread apple sausage muffins a.k.a healthy breakfast corn dogs.

Is there anything more glorious sounding? I don’t think so. These are basically a 3-4 ingredient breakfast that’s done in 30 minutes or less. It’s so easy when you can find a good, clean, gluten-free cornbread recipe mix like Bob’s RedMill (not sponsored, just love their stuff) and it becomes a one bowl situation.

Can You Make These Vegan?

Cornbread is something you can totally have fun with. It’s almost like a blank canvas. If you just think about how many corn bread variations you’ve seen at restaurants like jalapeno cheddar – anything is possible. You can totally substitute the egg for a flax egg and replace the sausage with a vegan breakfast sausage or another plant based protein source. DO IT! And let me know @pricklyfresh 😉

Sometimes I wake up early in the morning and try to make Kevin’s breakfast to-go while he’s getting ready. He’s not a huge breakfast person as in – he likes breakfast food but doesn’t always eat in the morning, however I know he’ll either eat it on the train or once he gets to work. Often this consists of a bagel with egg (I know, not the healthiest – I’m workin’ on it fam) or he’ll take a protein bar. Regardless – prepping things like these muffins make my life a whole lot easier in the morning and I can kind of just focus on what I need to do. I think it’s important not to spike your cortisol (stress hormone) in the morning, which is probably an entire other blog post for another day but we do a lot to prevent that from happening. Anything from our wakeup alarms, not looking at phones right away, for me I do my morning turmeric lemon tea after brushing my teeth and tongue scraping. So having breakfgst ready to go is super important! 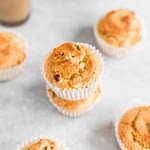